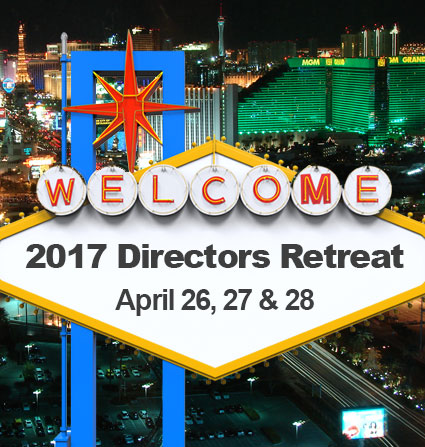 Directors’ Retreat ‘Save the Date’
Retreat at a Glance
Registration Form

Director’s Retreat Save The Date!
Retreat at a Glance
Directors Retreat Registration Form

This Retreat is sponsored by SoDakSACA.

Services in the spring of each year as a spring training enhancement to the annual fall SoDakSACA conference. OST directors and lead management staff attend the Retreat to network, re-energize, and learn new management and leadership skills. This conference provides a great opportunity for recruitment of new SoDakSACA members.

The 2008 OST Directors’ Retreat was held April 10-11-12 at the Spearfish Canyon Lodge in the northern Hills. A snowstorm across South Dakota did deter some directors from attending, and did cause some delay in our first day’s presenter, but all in all the time spent at the Lodge was fantastic! On Thursday, attendees were treated to information about Love and Logic by Candy Kalil and a session on Character Education resources by the Spearfish School District’s school counselor. Our key presenter, Michael Ashcraft, didn’t disappoint with his session on The ABCs of Powerful, Purposeful, and Positive Programming!

Our closing session of the day featured Oxana Golden from the Afterschool Investments Project facilitating a discussion about Advocacy. Dinner that evening was held at Latchstring Inn, and featured a nice presentation by Marianne Freng about the statewide eyeglasses for Mexico’s Kids project.

Day 2 of the Retreat featured Jennifer Brevoort and Richard Keis, from the Center for Afterschool at Foundations, Inc. presenting their ‘Essentials’ training. Tonya Schoenfelder ended our day with ‘Tension Busters’, a session to help us learn the importance of relaxation in our lives. Day 3, again featured a session by Oxana Golden on Advocacy and Sustainability, along with a closing session by Tonya Schoenfelder titled “Have you seen my jumper cables?” which helped all of us ‘re-energize’ for another year.

The 2007 OST Retreat “Links to Learning in Afterschool Programs” provided two full days of training by trainers from the National Institute on Out of School Time. The training focused on strategies school age programs can use to communicate and coordinate effectively with schools and parents about children’s learning, building on the latest research on engagement and motivation.

“Making a Difference for South Dakota’s Youth” was the theme of the 2006 Director’s Retreat, held at the Ramkota RiverCenter in Pierre March 29- 30, 2006. Main presenter the first day was Michael Morrow, Portland, OR who presented a variety of sessions, including working with challenging children, effective behavior management, and building moral children. Deb Bowman, Dept. of Social Services Secretary, provided a motivational luncheon keynote and Nikki Grandpre, Miss SD, presented on Internet Crimes Against Children after dinner, and also thrilled the crowd with a song and dance she performed at the Miss America pageant. The second and final day included a breakfast session with Carroll Forsch on Licensing Issues, Bridget Gothberg on Leadership Styles, Ellen Lee on Working with Children with Asthma, and Lisa Blake with a fun, ‘tools for the road’ session to re-energize the group for next year.

The 2005 Director’s Retreat was held April 3-5, 2005 at Cedar Shores Resort in Chamberlain, SD. “Polishing the Professional in You” was the theme, and did we ever! Robert Prentice kicked off the conference Sunday evening with a motivational talk on Effective Leadership, followed by a fun “Jeopardy Game” with all participants. Tracey Ballas, President & CEO of School-Age Notes, was our main presenter. Although Tracey arrived at the hotel late Sunday evening without her luggage, on Monday she provided us with a fun, full day of “Hire, Fire, and Inspire” sessions. 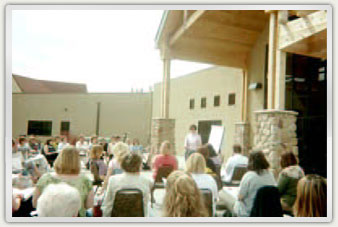 Tracey Ballas, President & CEO of School-age Notes, and afterschool training consultant from Ohio, presents to the SD OST directors outside on the east patio of Cedar Shores Resort overlooking the Missouri River due to the nice early April weather.

“Effective Management in Out of School Time:

A Director’s Retreat” was held April 19- 21, 2004 in Sioux Falls. Training consultants from the National Institute on Out of School Time, Ellen Clippinger and Molly McNally-Dunn, provided two days of management training to approximately 65 participants.

Some of the topic sessions included: Laying the Groundwork for Change, Building a Strong Staff, Applying the Standards/Program Improvement, and Research and Management. Round table sessions on the 2nd day were a highlight of the two-day event, as they helped directors with specific issues on topics of interest to them.

Several times throughout the two-day session, participants were able to do group and team-building activities. After arriving in Pierre by plane, arrangements were made to transport Tracey and Molly to Rapid City so they could tour Mt. Rushmore the day before our event. Tracey claimed she had never seen anything like the faces at Mt. Rushmore, and was so glad to have been invited to South Dakota!

There are no upcoming events at this time.